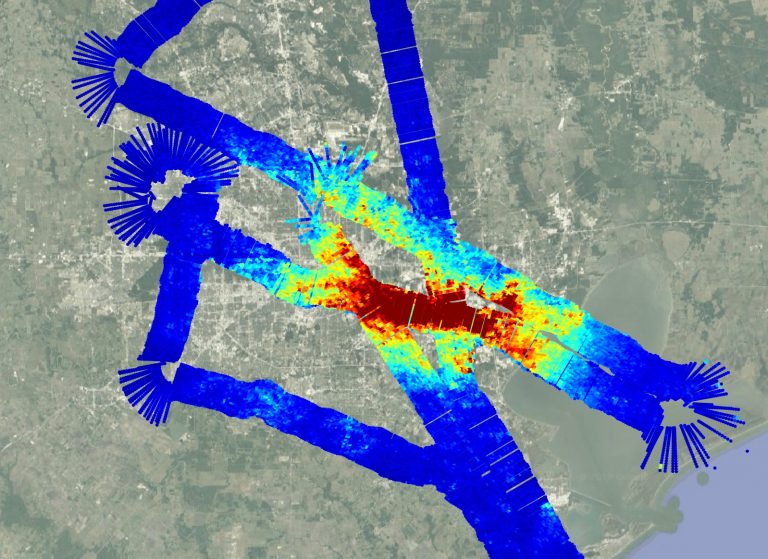 While air quality in U.S. cities has improved over the last few decades, there is evidence of substantial intra-urban variability in pollutant distributions, inequities in pollutant exposure as a function of community demographics, and of demonstrative differences in health and life expectancy as a result.

Our ability to explain and predict intra-urban pollutant variability and address air quality inequalities through decision-making has been severely limited by the lack of concentration measurements at spatial scales that resolve steep pollutant gradients (sub-kilometer). In the case of reactive gases with short atmospheric lifetimes, intra-urban spatiotemporal variability cannot be captured with traditional monitoring approaches.

We are using novel high-resolution measurements collected by the NASA GeoTASO and GCAS airborne spectrometers in multiple U.S. cities to quantify inequalities in air pollution burden and evaluate biases in past analyses relying on lower spatial resolution data products and models. In addition, we have evaluated the ability of TROPOMI to capture inter-neighborhood NO2 differences relevant for air pollution equality, both using oversampling and the individual daily observations, and conducted a 52-city analysis focused on constraining the contributions of diesel trucking exhaust on urban NO2 disparities.

This work is done in collaboration with Jeff Geddes at Boston University, Caroline Nowlan at the Harvard-Smithsonian Center for Astrophysics, Jay Al-Saadi and Laura Judd and NASA Langley Research Center, Kim Fields at the UVA Carter G. Woodson Institute for African-American and African Studies, Brian McDonald at NOAA, Kang Sun at the University of Buffalo, Arlene Fiore at MIT, and Phil Chodrow at the University of California Los Angeles.

From Demetillo et al. (2020): Airborne GCAS observations capture census-tract-level variability in NO2 pollution. Using these measurements, we report average NO2 inequalities of 37% for Black and African Americans, Hispanics, and Asians living in low-income census tracts. Disparities on individual days were as high as 85%. From Demetillo et al. (2020): Remote sensing observations were well-correlated with surface-level mixing ratios, however, the surface network was two sparse to capture the intra-urban spatial variability. From Demetillo et al. (2021): On average, TROPOMI observes NO2 disparities with race-ethnicity and income of 28%, with much higher inequalities observed in more populous cities. From Demetillo et al. (2021): Diesel traffic is the dominant source of NO2 disparities, and that a 62% reduction in diesel emissions would decrease race-ethnicity and income inequalities by 37%.

Type to search or hit ESC to close
See all results